Retirement Circa 2017 (Part 2: The New Retirementality)

The second webinar was by Mitch Anthony, author of the book, The New Retirementality. His overall message was that retirement, as we know it, is an “artificial finish line” and does not fit 2017 lifestyles. When the concept of retirement was developed, people did not live very long afterwards. Today, people can live two or three decades after stepping away from a full-time career. The new “badge of honor” will be working in later life.

Mr. Anthony defined “work” as “an engagement that brings value to others and meaning to you.” It does not have to be for pay. He cited a study that found that “staying healthy” was the #1 reason given for continuing work. He also stressed that older adults bring valuable resources to jobs or volunteer activities: their “intellectual, relational, and experiential capital.” In other words, skills, knowledge, and contacts honed over their careers.

Saving money was mentioned as the means to an end rather than an end in and of itself. Mr. Anthony mentioned that saving money gives people freedom to do what they want with their time. Another key point was that “old” is an attitude- not an age. People decide themselves, by their thoughts and actions, if and when they are “old.” 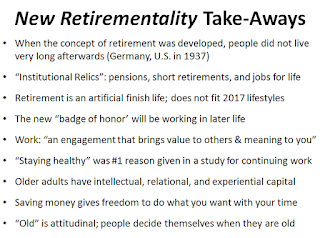 The Power of Positive Habits

I recently attended an online class about the power of habits sponsored by Next Gen Personal Finance. In that class, I heard this statement:...