Develop a Financial Margin of Safety

The way people schedule their time is an example of the “margin of safety” concept. For example, if it takes 30 minutes on a day with “normal” traffic to get to work, you might leave 45 minutes ahead of time “just in case.” The “margin of safety” concept can also be applied to ways that people handle their personal finances. Below are three strategies to increase your financial margin of safety:
Live Below Your Means- People who spend less than they earn have a cash cushion to weather the unexpected. Not only do they have positive cash flow (income greater than expenses), but they likely have accumulated some savings by living frugally and setting aside some of their extra cash.


Build Adequate Emergency Reserves- An emergency fund provides a margin of safety against unexpected events such as accidents and unemployment. Financial experts recommend setting aside 3 to 6 months expenses, but many households do not come anywhere near this amount. Any savings is better than none.


Pay Off Debt- Debt is an albatross around personal finances. The sooner it is paid off, the more “wiggle room” people have to handle life events.  Aim to pay off outstanding credit card debt in a year or less and to make a final mortgage payment before retirement.

Focus on the Future to Save More Money

According to research by Sarah Newcomb, a behavioral economist at Morningstar and HelloWallet, people who are future-minded and think ahead have more savings than those who do not. In addition, two simple areas of inquiry can accurately gauge the status of a person’s financial health:

Studies have shown that “time is money.” In other words, people who focus on the future and feel that they create their own financial destiny tend to save more than others for retirement and other financial goals. When people focus on the future, they tend to be less impulsive (e.g., spending habits), regardless of their level of financial literacy.


Newcomb found that the strongest predictor of good financial decisions is not financial literacy but, rather, a focus on the future. High levels of impulsiveness and materialism, on the other hand, were associated with poor financial decision-making. For short-term thinkers, risk is not as painful as waiting.


In addition, Newcomb’s research found that “power is happiness.” Empowered people are financially happier than others. Conversely, people who don’t feel in control of their personal finances have been found to exhibit negative emotions about their financial status up to those earning a six-figure income.


Newcomb’s research, which is summarized in her book, Loaded, has found that, the farther away something is in the future, the less people care about it. The secret to fostering future-mindedness by yourself and others is to trick your brain to think that “the far away is close.” When this happens, people care more about the future because the “Here and Now” is clear and intense while the “There and Later” is vague, abstract, and unemotional.

Personal Finance Tasks by the Decade

Although actual timing will vary from person to person (e.g., I completed a Ph.D. program in my 40s), below are some suggested financial milestones to achieve during each decade of adult life. Milestones achieved at an earlier age (e.g., a good credit score and an adequate emergency fund) should continue during subsequent years.

To learn more about age-based financial planning milestones from age 0-10 through 90-100, read “Money Milestones for Each Decade” (Reuters). 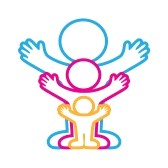 I taught the third webinar about strategies that late savers can use to catch up when they are behind on retirement savings. According to the 2017 Retirement Confidence Survey, only 61% of U.S. workers have saved money for retirement and 47% of those with savings have less than $25,000 saved including 24% with less than $1,000.

The key message from the webinar was that “all hope is not lost.” Time is still on the side of late savers in their 40s and 50s who may live another 40 to 50 years to earn compound interest. There are two general categories of catch-up strategies:

2. Spend less LATER to reduce the amount of savings needed (e.g., trade down to a smaller home)

The two categories of retirement catch-up strategies can also be combined. An especially effective strategy is retiring just a few years later than planned. By delaying retirement, people can continue to save in tax-deferred accounts, earn higher Social Security and/or pension benefits, and delay withdrawals from their savings. 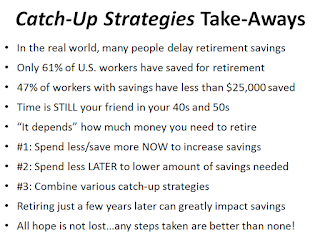 Every American has been impacted by COVID-19 in some way. On Monday, March 16, America started to shut down en masse. As we complete week ...